MRR: You are the first D.C. band we’ve seen out here. How have you guys found S.F.?

Ian: At first it was real weird. The On Broadway show on Friday night I had felt real weird about. It’s a lot different in Washington, or anywhere else we’ve played, for that matter. It seemed real negative at first, but then at the Tool & Die I had a great time. The people seemed really cool. I had some problems with a few people but I hope we got things straightened out… At least I did not get beat up at the Tool & Die.

Brian: We seemed to have reached an understanding probably based on misunderstanding. I don’t really understand their attitudes and I guess they don’t understand ours but we’ve reached some kind of balance with each other, so I think we can continue to play here. 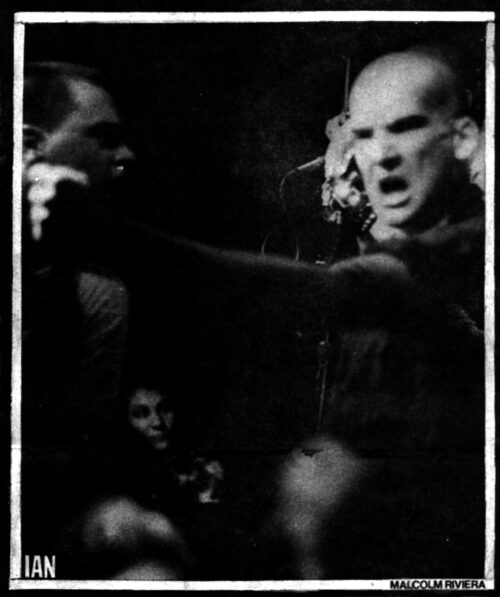 MRR: Has every city had its own variation of a “punk” scene?

Brian: The dancing is all different; it is kind of funny.

Ian: In Boston they dance like penguins. They all punch dance.

Lyle: They shadowbox. They walk around real fast.

Ian: In Detroit, people couldn’t dance ’cause we played a really small place.

Brian: It was packed.

Ian: It was smaller than the Tool & Die. It was a small room and there were close to 250 people packed in. It was absolutely packed, so people would mostly push against each other. I think it’s great, what is happening across the country right now. This territorial kind of music scene. As opposed to this nationwide music we’ve been living with all these years.

Brian: It’s the first time in the U.S. that this has happened to rock music to a great extent.

Ian: Unfortunately, it’s even gotten to the point of gang warfare in some areas. You know, who rules what city and which bands are tougher. That is something I felt when I cam here. I felt people were challenging me because I was from Washington, which has this apparently incredible reputation, or whatever. And I am talking basically in the fighting sense—who is tougher than two. That’s what I felt was going on when I was tackled at a show. But apparently it’s some kind of a local tradition here, to tackle out-of-town bands. A ritual thing…

MRR: Tell us more about the “Straight Edge” phenomena, how it all began, what precisely your position is on it, etc.

Ian: Well, basically how it originated was that Jeff, our drummer, and I were in a band called the Teen Idles, and we played out here. We were at that time trying to get away from a really corrupted music, you know, basically your heavy metal bands who were into heroin, cocaine, just a lot of drinking. We just drank a lot of Coke and ate a lot of Twinkies and were a fun kind of band. That’s what the Teen Idles were about. Because of this we found we couldn’t play anywhere. None of our friends could get into any of the clubs either.

Jeff: ’Cause they did not drink and it wasn’t profitable.

Ian: And kids weren’t 18. (D.C.’s drinking age.) So we found that the best way to avoid all the hassles about not being able to get into clubs was not to drink. We’d seen what Mabuhay Gardens had been doing with minors, x-ing their hands so they could get into clubs, so we brought that back to D.C. and introduced it to all the clubs there. We said “how ’bout it?” and it worked. Kids go to go to shows, on the one condition that they didn’t drink; and it just kind of followed from there. People realized that they weren’t screwed up: they were more alert. If they ever had to be aggressive they knew why. They could remember what it was they had done. People just generally felt good about themselves. 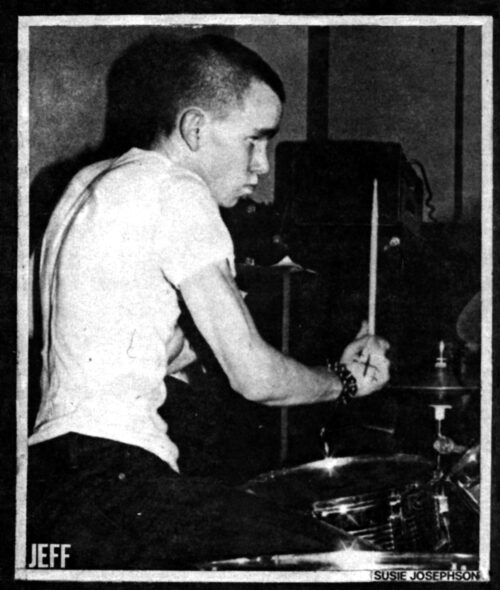 MRR: So initially it was a device to get people into the clubs.

Ian: In a general sense, speaking for myself, I don’t like drugs, and I don’t enjoy drinking. That’s my personal feeling. Everyone had a different story. Whether they do or do not. I was never really into it. I drank at the age of twelve. All my friends did it and I was really alienated by that. It has something to do with the fact that I moved out here to Palo Alto when I was 12. In my eyes, that is a really forming time in a person’s life. When I came back all my friends were absolute drug addicts and I wasn’t, because I had not been in Washington at the time. So I got to see them from a different point of view. That is why I hated it so much, to see them having ruined their lives so much.

MRR: Now that “Straight Edge” has become popular in certain areas, is there any misinterpretation of what it is about?

MRR: Are you, by this philosophy, trying to restrict other people’s personal habits?

Brian: No, absolutely not! Never! The thing is that “Straight Edge” is not just not drinking or not taking drugs. It’s an outlook on life. You look at life in the sense that you want to be in control of your body and yourself. You want to have a clear view of what is going on.

Lyle: You want to benefit from whatever it is that you’re doing.

Brian: And we never, we never will tell you what to do. We’re just saying in our songs that this is what we do. Like it, don’t like it; do it, don’t do it. People can do whatever they want to do.

Ian: “Straight Edge” is not a movement. It’s a totally personal facet of a person’s life. A lot of people have this idea that Washington has all these punks that don’t drink, take drugs or do anything and do not have sex, which is a topic we’ll get into in a second (everyone in the room laughs). That’s a wrong view. There are people in D.C. who do drink and do take drugs and they understand “Straight Edge” just as much as the people who don’t. It’s not the kind of thing where you do one thing, and you are in and if you do this, you’re out.

Brian: It’s not about getting a mohawk just because your friends got one.

Ian: It has a lot more to do with what your outlook is on how you run your life.

MRR: What about sex?

Ian: Well, it only comes up once really, in “Out of Step,” where I say, “Don’t fuck.” But it is really important that the terms that I use are understood. I am not saying “don’t have sex.” I am trying to make a distinction.

MRR: A distinction between a crude animalistic sexual encounter and a more serious…

Ian: No, no, no. Because you can be animalistic if you want. That’s up to you. (Everyone laughs.) It has a lot more to do with how you go about it, and what you value it as. As a chalk on your bedpost, as a scorecard. If you think that it can make you better if you get laid all the time, well then that’s what I’m talking about. Sex is obviously very important or none of us would be here. (Solicits laughs.) And besides, it’s… great. I’m not against sex. I’m not asexual. I’m against that kind of superficial way of going about it… It’s very important for adolescents who come up in life with all this pressure. I mean, society has this terrible attitude about it. On television kids see people every night going off with different people. And these characters never have any of the real life problems that occur, like pregnancy, V.D., etc. It’s always clean. It is a myth. It’s wrong. And a lot of people get caught up in the fantasy and they get really messed up by it, and they go through really bad feelings about themselves.

MRR: You’re not the Moral Majority?

Ian: No, we’re not the “punk” moral majority. It’s all rumor. 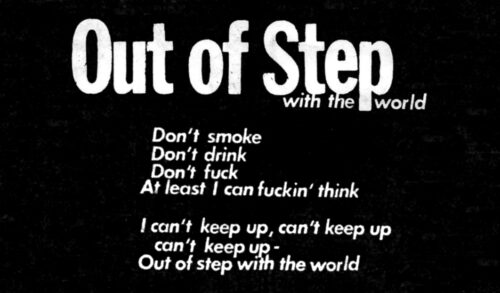 MRR: What’s the story with the D.C. Scene now?

Jeff: Well, different bands are becoming bigger, and stuff. The problem is there aren’t any clubs. A lot of kids are getting into the music, but there is really nowhere to go. So in some ways it’s growing and in other ways it’s stagnating.

Brian: Actually, there’s supposed to be a lot going on at the moment but we’re missing it by being here.

Lyle: Contrary to one horror rock band’s opinion, D.C. did not die when Minor Threat took a leave of absence.

Brian: You know that band the Misfits. They are a really big hit out here (sarcastically).

Lyle: They decided that the scene died, and that’s just not true. There are more bands per person in D.C. than there are elsewhere. The ratio is really high.

MRR: So the proportion of punks in bands is pretty high then?

MRR: Does the Dischord Record label relate to all D.C. bands or just yours?

Ian: It is just Jeff and I, basically, and we record other people.

MRR: What is it currently up too?

Jeff: The SS Decontrol 12″ just came out and we are helping them distribute it. Then in August we’re putting out a combination album, half by the band Void and half by Faith, and after that a 7″ record by Iron Cross, if they ever manage to get organized.

MRR: I remember reading a disturbing interview with Iron Cross. Someone had asked them if they were racist and they replied, “Well, isn’t everybody?”

Ian: Now there’s a touchy subject. Jeff and I live with the singer in Iron Cross and we know the band. They claim not to be racist or Nazis but on the other band, there are quite a bit of overtones involved as well as ignorance. A couple of people in that bands are extremely ignorant. 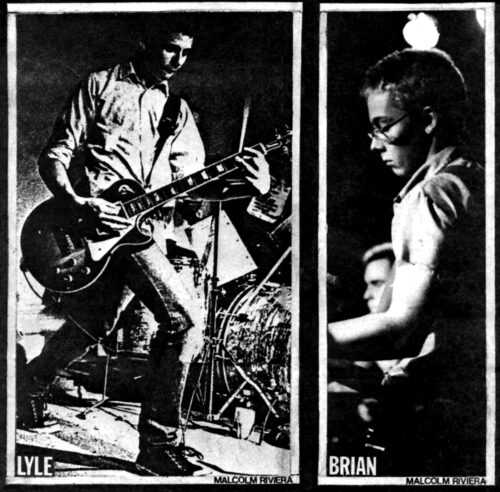 Ian: Yeah, they literally beat up gay people for no reason. They are at the point where they become noxious if you mention the fact that someone is gay, or if you are gay or whatever. I think that there are obviously some people with mental problems in that band. I personally feel that there are definite Nazi and racist overtones involved.

Lyle: Oh yeah. I mean just their affiliation with the so-called British skinhead movement says something.

Ian: Do not bring that up around their lead singer ’cause he’ll argue to no end that Iron Cross has nothing to do with Nazism.

Lyle: Yeah, it was given to peasant women for baking bread.