Blog of the Week: Remote Outposts

We live in an age where almost every punk record ever released is available for download. Usually you’ll find what you’re looking for on one of the hundreds or Blogspot sites dedicated to making old out-of-print vinyl accessible to everyone, and that is awesome. But what the vast majority of these blogs lack is a personality, a connection of some kind to the music presented. All you get is the record cover, a download link, and if you’re lucky a track listing or a sentence or two about the record.

So it’s totally exciting when you find a site like Greg Harvester’s Remote Outposts. Like Terminal Escape (which is dedicated entirely to cassette releases and includes entertaining reviews of each tape), Remote Outposts can be just as enjoyable to read as it is to listen to all of the great music available. Greg’s musical tastes are all over the map — literally — but you will find a heavy concentration of “Region Rock” (hard to define, but mainly music from the Southeastern US from the ’90 thru now that tends to be melodic and rough) and a preference for demos and records that never found the appreciation they deserved. Lengthy descriptions accompany each post, giving these releases a much more tangible essence. “I try to talk about how it makes me feel or talk about what kind of people made up the bands. Sometimes, I think that’s even more exciting than the music…the stories behind it,” says Greg.

Mr. Harvester, who names Terminal Escape and Region Rock and More as sparking his interest in blogging, is a veteran of too many Southern, Midwestern, and Bay Area bands to mention, and in his touring and moving around the country has amassed quite a collection of demos and records over the years. So many that he’s been able produce a blog post every single day recently. Also in the mix lately has been a bunch of great demos and live tapes on loan from the collection of Erick Lyle (formerly Iggy Scam of Scam zine, and also a million bands from the South and the Bay Area). 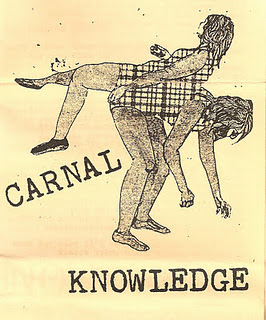 But don’t think that just some old dude digging up tapes from the “good old days.” Remote Outposts features a lot of current bands, like Wade Boggs from Athens, GA, who released their LP on the site, and Cleansing Wave from Worcester, MA, a newish noisy crust band.  Greg says, “I like to think of it as an archive more than nostalgia… I also revel in pulling people into the blog by posting bands they like and then using that as a platform to discuss ways they can combat sexism, transphobia, macho bullshit or racism in their own punk scenes. Music is definitely the driving force behind it all, but it doesn’t end there… I did one full week where I posted only bands with only women in them because I was sick of so many music blogs (and punk and society and everything) that were so male-centric. I’ve been trying to be more conscious of posting bands with women in them.”

When asked for his favorites, or suggestions on where readers should start on his web page, Greg cited: “Fred Lane, Twat Sauce, Pink Collar Jobs (from NC), the multiple Impractical Cockpit tapes I’ve posted, Hickey Million, The Curse, Jarvis (or any band from Chattanooga, TN, or labeled as Region Rock),  Potential Johns, Uke of Phillips, etc, etc….Download anything on there. So far, I love everything that is on the blog. I just want to share music that I love and hope that people will enjoy it.”