Welcome to the second in our series of Life During Wartime interviews, where our tight homies at KBOO’s Life During Wartime radio show in Portland, OR, talk to bands who perform live in the studio… This time Colin interviews Portland’s moody BELLICOSE MINDS, whose gloomtastic on-air performance can be heard here. Read and weep… 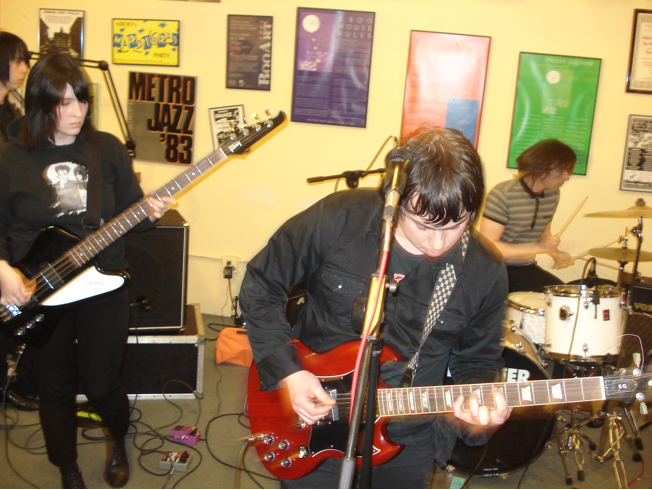 Colin: Who are you guys? What is your band? What are you names and what instruments do you play?
Nick: We’re the Bellicose Minds. I’m Nick. I play guitar and do vocals.
Suzy: I’m Suzy and I play the bass guitar.
AJ: My name is AJ and I play the drums.
Keith: I’m Keith and I play second guitar and keyboard.

Colin: How did this band start?
Nick: It was Suzy and I at first.
Suzy: Well AJ and Nick played in bands together, and I’ve always been listening to their bands, so Nick was like, “You need to get on it.” That’s about it. It started as the three of us.
Nick: It wasn’t like that.
Suzy: Kind of.
AJ: I thought it was more Nick and Suzy jammed a couple times and wrote some stuff. They were like “Hey, play this beat.” We just started jamming.
Suzy: What I meant by that is that I’ve never played before in any other band. It was the first time I picked up an instrument.
Keith: I joined the band in November 2009 playing keyboard and second guitar.

Colin: How did you guys settle on the name?
Suzy: I think Nick came up with it.
Nick: I came up with the name. I was just trying to come up with a name to describe who we were and what our sound was and that was it.
Keith: It was in vain.
Nick: It just sounded good.
AJ: What were some of the other names?
Suzy: Morgue Puppies.
Nick: That wasn’t me. I didn’t have anything to do with that. Colin: War Puppets?
Keith: No, I believe it’s Morgue Puppies.
Suzy: Well War Puppets is good too. [laughter]
Nick: I endorse none of it.
AJ: I think at one point Chernobyl Nightlight was one.
Nick: Yea, that was one.
AJ: That would’ve been pretty grim.
Suzy: That’s fitting.
AJ: Oof.

Colin: What made you guys decide to play the style of music you play?
Suzy: Me, because I couldn’t play hardcore or punk. It kind of derived from that.
Nick: Yea, and it was just other influences that we drew off of other than hardcore and punk.
AJ: Something different.
Nick: Well it was just how we did our sound. That was what happened when us three started writing songs. It wasn’t hardcore and it wasn’t punk necessarily.
AJ: I think it was more just like an idea to try to emulate this style of music. Mainly the Cure, Joy Division, and post punk all rambled into one. And Nick just said, “Play this beat.” And it went from there.
Suzy: We play that beat a lot.
AJ: I’ve had to play that beat a lot. It took me a long time to learn that beat.

Colin: Are you comfortable being considered a punk band or do you think that’s too limiting?
Nick: I’m comfortable with that. We have songs that vary. Some of our songs are straight punk songs, some of them have more of a post punk sound.
AJ: The lyrics are pretty punk rock, I guess, if you want to say that.

Colin: So there have been a lot of bands starting sort of within the post punk/peace punk/goth sound and everywhere in between. Would you say that there’s sort of a separate scene starting and if so what do you feel is your role in that?
Nick: If it’s a separate scene I think our role in it is just with all the other bands playing and doing shows together. I think some people like that stuff more, at times, because it has melody and it’s not like crust or grind where everything is abrasive and in one line.
AJ: I think people have always listened to music like that, and ever since Bellicose Minds started people were like, “Oh, it’s OK to do music like that.” It wasn’t so generalized as just hardcore or punk bands.
Nick: Yea, I think the Estranged and Spectres were doing that as well, and maybe a year or two before us.
Suzy: And Prids as well.
Nick: I don’t know; it’s just new stuff happening.

Colin: Keith, how did you get involved in the band?
Keith: I’ve always hung out with Nick and Suzy, and played music a lot. And you know, we’d just kind of go down to the practice space late at night and play music. Nick asked me to try out on keyboard, and so I did it and I started playing guitar too. I realized I could do both of them and it just kind of fit. We get along with each other.

Colin: There has been some level of success with the band. Was that expected?
Suzy: Our first show I was like, this is just gonna be terrible. I’m pretty self-conscious as it is… Apparently everybody goes home and listens to Sisters of Mercy and the Cure, so we’re good. [Laughter]
Nick: To add to that, when we were writing songs she would be like, “No one’s gonna listen to this music. You’re nuts. Why would you ever want to play out with this?” I was like let’s try it, who cares.
Suzy: I really enjoy it, so…
Nick: That’s half of it, yea.

Colin: What releases have you had so far?
Nick: We had a demo tape, which had two songs that we recorded and released on our own. Then there was the Buzz or Howl Sessions, which we recorded with Stan at Buzz or Howl Studios, and we released on our own. Then we just got our self-titled four-song EP in, which came out on Whisper In Darkness and was recorded by Adam Becker last summer, and just finally came out. That’s it.