From the Vaults: Made in South Bay 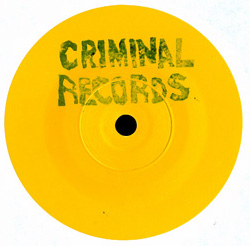 Ever see this 7″ sitting in the dollar bin? Hope you picked it up! Though details are sketchy and hard to come by, the Made in South Bay compilation is probably one of the rarest American hardcore records in existence. Supposedly only 100 were made and given away at a show in Los Angeles in the early ’80s late ’90s (??). Given that there’s no label artwork or picture sleeve—just a stamp on one side of the record—I wouldn’t be surprised if at least half of them were tossed in the trash over the years. The only copy I’ve ever seen has a sticker on the other side with a track list.

The bands? The most “well-known” of the six is Artistic Decline. They had a four-song 7″ in ’83 and an LP that was supposed to come out around the same time but didn’t end up getting released until ’87. (The album, which features Pettibon artwork, is a bit underrated in my opinion, probably due to its rarity and the fact that it says ’87 on the cover instead of ’83). Ill Will pops up on a couple of the Life Is… SoCal hardcore compilations that New Underground Records put out. I don’t really know anything about the other four bands (or  when they were around)—Genetic Damage (think they shared one or two members w/ Ill Will), Western Waste, Bedlam, and Unknown Society.

You might have heard Unknown Society on the Staring Down the Barrel comp LP that came out a few years ago (their track was taken from this 7″). Now you can listen to the entire six-track EP here:

My guess is that “Criminal Records” has some connection with Ill Will, since the band reunited in the late-’90s (?) and released a CD on the same label. But who knows? If you can shed some light on this obscure comp, post a comment…