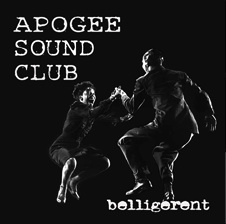 The difference in attitudes regarding age in punk and jazz is split in much the same way as the age is regarded in Western and Eastern action movies. In Western action movies, youth is usually privileged as a source of strength and power, whereas in Eastern action movies, and martial arts films in particular, the older a character is, the more they are represented as a dangerous and skilled fighter. Enter APOGEE SOUND CLUB, featuring San Francisco underground music veterans Liz Byrne (bass, the KIRBY GRIPS, others) and Wade Driver (guitar, the HICKOIDS, 50 MILLION and about 50 million other bands), as well as the younger Harrison Holloway on drums (the MOLESTATIONS). Liz and Wade have been honing their craft for a long time now and in a number of different styles, including different kinds of rock music, pop, experimental projects and jazz. And unlike many, or the stereotypical Western action movie character, they have retained a high level of artistic craftsmanship, originality and ferocious power. Many in the Bay Area took umbrage with the REACTION (Liz and Wade’s previous concern), but to deny that they were a visceral rock ‘n’ roll assault would be, I believe, folly. APOGEE SOUND CLUB represents a distinct new direction for the pair. Gone are the mod allusions and the direct rock riffs and guitar leads. Instead, ASC pushes with a choppier and much more angular guitar style, that accommodates much more for play in the playing, but whilst still sounding tight as a bull’s ass. The rolling, groovy bass is still there, in much the same way as it was in the REACTION, but it has been effectively reshaped so as not to draw comparisons to the previous outing. This style rounds out the sound of the band and this record, which is crucial when you consider the drumming. Harrison is spastic, fast and would at times draw the comment “over-busy” from me if it didn’t work as well as it did. Here, four songs are given the vinyl treatment with a nice, slightly lo-fi sounding recording. The three with vocals all draw on all of the aforementioned qualities to craft killer punk songs. The lyrics are especially worth noting, as they draw on Wade’s considerable knowledge of subversive philosophy and politics, especially Situationism. However, the crowning moment of this record is the instrumental “You Fill Me With Inertia.” This may be one of my favorite new songs of the year. The simple driving guitars, the underpinning bass, the clattering drums, all surging to the one moment when the guitar stands alone with one ringing, slightly dissonant chord… a singular moment and a proper beginning for an exciting new band. (Fully Intercoastal Records)