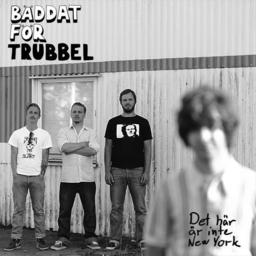 As a punk record aficionado, there are few things more exciting than finding a great record by an outta-nowhere new band. This is that sort of record…only better. In terms of international punk rock, I haven’t been this wowed by a debut since EDDY CURRENT SUPPRESSION RING dropped their first A-bomb. Got your attention yet? Though Sweden’s BFT shares little in terms of sound with ECSR, they share that same brand of confidence and pitch-perfect execution in what they do. And what is that, you ask? Well, imagine pairing a classic Euro Killed By Death sound (sung in Swedish, no less) with a lean toward pub rock and the amphetamine-fueled R&B that dominated the UK in the mid-’70s. While that might spell trouble for anyone unwilling to look past, I dunno, MASSHYSTERI for their Euro-punk fix, this amounts to nothing short of a fucking lightning bolt to the rest of us! It’s refreshing to hear a band mining the sounds of the initial punk era but shrugging off the pose and fashion-aping, opting instead for legit soul and passion. No easy feat, my friends. There’s not a single fucking dud among the fifteen tunes here, so singling any cuts out is a challenge. Check out the frantic “Fan Ta Dig” and the powerful, anthemic heart breaker “Jag Har Ingenting” for the purest, most effective distillation of this band’s many strengths. I have not-so-silently been singing this band’s praises since I first encountered them in late 2010 and, thankfully, a scant few copies of this LP have finally landed stateside. If you have any interest at all in hearing a neo-classic punk rock album, I implore you to check this LP out. Seriously…find this NOW. An absolutely perfect, jaw-dropping record. (Punks Only)