By our new record reviewer Matt Badenhop, from MRR #346. 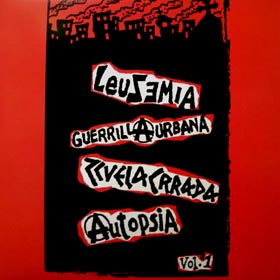 Fuck yes! Lengua Armada brings us yet another reissue of an old Peruvian punk gem! This time it’s a cassette from 1985, remastered from the original tape. LEUZEMIA (aka LEUSEMIA) kicks it off with three catchy, vocal-driven classics, recorded much rawer than their brilliant LP. Next up is ZCUELA CERRADA with four tracks of fuzzy guitars and basic rhythmic hooks. The vocal delivery is really dynamic, and the singer’s voice is always on the verge of cracking, giving it such an adolescent and honest sound. On to side B and we have the pre-ATAQUE FRONTAL band, GUERRILLA URBANA, with five great rudimentary punk blasts. Last but not least is AUTOPSIA, for whom I recall a great 7” reissue was released a couple years ago. AUTOPSIA pushes their sound into hardcore territory with four aggressive ragers with convincing throaty vocals and insanely catchy choruses. All of the material on this LP is consistently raw and primitive and full of hooks and crafty song ideas. There’s also a great foldout insert with lyrics, art, photos, and a really cool testimony, in Spanish and English, on the origin of underground rock in Peru in 1985. Overall this is an amazing glimpse into the early days of the Peruvian punk scene. Get it!
(Lengua Armada)