Two for the price of one this week with MRR reviewers Kenny Kaos and Brace Belden! Wow. This is badass. Seriously.

The really good ones are often the toughest to review. It’s mid-tempo, it’s melodic and catchy, it’s got a really full sound and the female vocals carry a sense of urgency that makes the difference. I suppose if I had to label it, I’d call it power-pop, but I refuse to label it. This one is going to live on my turntable for a little while. 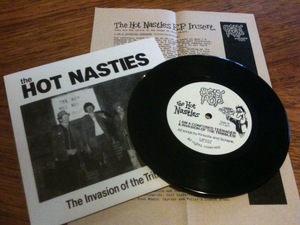 HOT NASTIES – The Invasion of the Tribbles EP

Reissue of a Calgary punk single from 1980 and it’s great! It’s got that British sound a lot of Canadian groups had for some reason, and it’s a pretty perfect meld of pre-UK82 but post-77 Britpunk sound mixed with tasty (and tasteful) pop licks that symbolize everything I like about punk. Dumb teenagers from nowhere writing pop hits that maybe four hundred people will ever hear (especially with the original 7” running at around $300).

The B-side has a bit of a Flying Nun sound, almost. If you’re a modern punk, by which I mean if you’re a genius who likes all kinds of good music, and you don’t (or maybe only slightly) ghettoize yourself in some bizarre, childish fetishistic sub-sect of a youth movement that was at one point led by someone named Johnny Rotten and died when people were still wearing bell bottoms, you’ll recognize a pretty wide range of sounds going on here. Which means it’s a great goddamn record — and hell, who knows, even skinheads might like it. Ugly Pop is doing a small series of Canadian punk reissues. Off to a great start with this one.
(Ugly Pop)