Phil Vane, from the seminal grind/crust band EXTREME NOISE TERROR, died on February 17, 2011. He was 43 years old. ENT session bassist Andi Morris sent us this remembrance of the legendary vocalist… 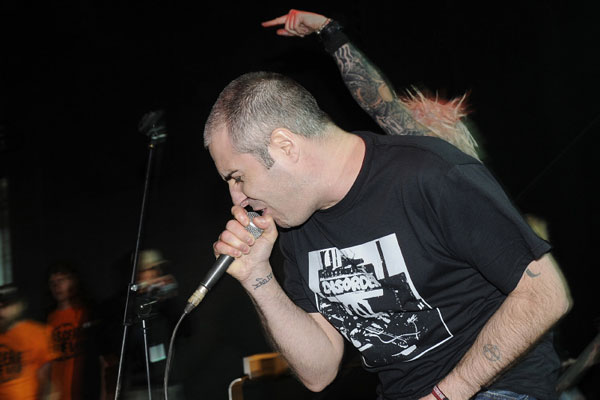 I remember the first time I met Phil. My band, Desecration, were on the last date of a European tour with EXTREME NOISE TERROR. This was during the period that Phil had left the band, but he had come along to the London show as he had not long moved back from Switzerland and was going to get on stage and perform a few old classics with the band. I had seen photos and videos of Phil playing in and old days of ENT  beforehand, and I thought I knew the kind of wild character I was about to meet. However, the person I was introduced to backstage at the London venue was a mild-mannered, charming, friendly and completely welcoming. Years later I discovered the true extent of his charm when he managed to talk himself and an entourage of us hungover punks onto a plane that was actually due to leave before we got to the check-in desk. Just a hint of the cheeky Vane smile and we were being escorted through the airport by stewardesses and onto the plane.

This was indicative of Phil as a person through and through. Always chatty, and incredibly humble, he would always take time to chat to fans and would always be found out in the crowd checking out the other bands on the bill. A music fan, and a punk to the core, he was always getting excited about such and such new band that he’d been sent a recording by, or had discovered on the web. Such excitement was often followed up in practical terms by him arranging tours or gigs with the bands that he was listening to.

I did not know Phil during his wild years and I’m sure that there are plenty of people out there with a crazy Phil story or two, but I am grateful for all the time I spent trapped in a sweaty van traveling the world with Phil, and am even more grateful for the hours I spent on stage with him.

As an addition I would also like to say that after having just spoken to Dean on the phone that he wanted to say RIP to his best friend, the most kind and honourable punk in the world, and that he is too choked to say more at the moment. He also wanted to say that “Extreme Noise Terror will continue!!”