Underground Out of Poland 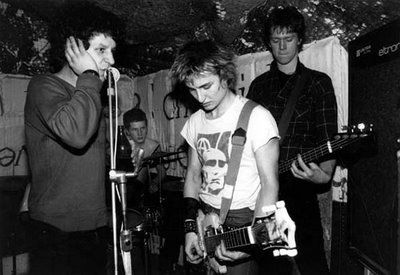 Not only is Dezerter the best HC band from Poland, but they’re one of the greatest bands from any country, ever. Well, in this blogger’s opinion, anyway. They were one of the first Eastern European hardcore bands to release vinyl, and they’re still around today! Check out there website here: www.dezerter.most.org.pl/

Earlier this year, MRR shitworker “Willie Nelson” informed me that he had inherited an old punk’s tape collection (a story that really deserves its own post) and invited me over to his place to check them out and drink some fancy vodka he brought back from a recent trip to Europe. This being my idea of a perfect date, I gladly accepted… About several boxes of demos (and at least as many shots) into the evening, we came across one with a strangely homemade case. On closer inspection, it was a split between two bands: one whose name was written in Cyrillic characters, the other—Dezerter. I flipped! This was their 1985 split tape with a band from the (former) USSR that I had been trying to track down a recording of for years! We popped whatever was playing out of the stereo and threw it on… The first song was one I’d never heard before, and it was KILLER. What a find! The live recording had that slight echo—it was like listening to some kind of long-lost transmission from another planet. (One where they play raging hardcore, I guess.) Now here’s the tragedy: A few tracks into the tape, the music just stopped. Right in the middle of the song. What the hell? I flipped it over to side two… Nothing. I pulled it out to look at the actual magnetic tape… FUCK!!! It was so old, the tape inside had broken. Goddamn it! Well, at least I had gotten the chance to hear a couple tracks, right??

Fast-forward to the next day: Willie’s got a close personal friend who, when he’s not winning international air-guitar competitions, does digital audio editing. So it turns out this story has a happy ending… The tape was professionally repaired and transfered to digital format. Thank you Craigums!

[After hosting the MP3 of the split tape for several months, we took it down… Thanks to Dezerter for letting us share their music! Check out the Underground Out of Poland album on CD and the upcoming vinyl reissue out soon…]