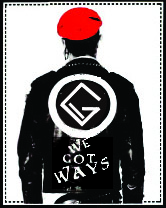 It occurred to me recently that for the young teenage mutant just getting into DIY punk, LOS CRUDOS’ existence as a band is as far in the past as BLACK FLAG’s was for me when I first got into hardcore. The ’90s, while still much maligned by punks1—for reasons both good and bad—are now two decades into history. As hard as it is to believe for those of us who remember them live and in the flesh, the marching on of time has transformed Crudos from a furious new sound annihilating the (then) stale HC scene, into a band from way-back-when whose records you have to search for on eBay or steal from your older sister in order to have. Of course, whether ones relationship to Crudos was formed when the band was still around or through a hand-me-down tape, used record, or fileshare, time has definitively spoken: Los Crudos is one of the absolute greatest punk/HC bands ever.

It would be difficult to exaggerate Crudos’ impact on my punk coming-of-age. I had read about hardcore breaking down the walls between audience and band; Crudos showed me how cathartic that could be with their red-hot live show. I had heard about the do-it-yourself ethic; Crudos showed me how cool it could be to hold a record in my hands that had literally been constructed by my favorite band. I craved punk music that could speak to my emerging political and intellectual ethos; Crudos showed me that a band could be fiercely political but not sloganeering. Indeed, despite all of the shit talk from some subsequent punks on how the ’90s were “too political,” the predominant politics of the day were often little more than a smug blend of holier-than-thou moralizing and irritating liberal angst. Worst of all, it seemed like everyone else had decided that they should give a shit cuz they read it somewhere in a book (or record insert). I felt extremely alienated by just about everything, and I related to none of that navel-gazing bullshit. As far as I could tell, neither did Crudos.

It would be similarly difficult to exaggerate Los Crudos’ influence on the DIY punk scene in general. When they first emerged, the number of people interested in raw international hardcore was microscopic, as the vinyl detritus produced by the tiresome decade-long beard-core trend can attest. Even the other cool USHC bands of the era couldn’t quite boast Crudos’ thrashing ferocity; HIS HERO IS GONE was basically a crust band with melodic (dare I say emo?!) proclivities, BORN AGAINST was more-or-less an Articles of Faith rip-off band with a Crucifucks sense of humor, and what the fuck was up with all those skits on the ANTISCHISM LP? In any case, none of these bands could honestly boast WRETCHED, IMPACT, or ATOXXXICO as their major sonic influences.

I have heard a myth repeated that Crudos created a Latino punk scene out of thin air by singing in Spanish, but the truth is that there have probably been more Spanish-speaking punks than English-speaking punks the world over since approximately punk year zero. Crudos didn’t create Latino punk in the US (they would have been the first to tell you that), but they did help publicize a network that—in large part because of their efforts—no longer toiled in relative isolation.

Despite their prodigious impact across the DIY punk world, Los Crudos was perhaps most influential in their own city. I don’t think that it would be too much of an exaggeration to say that, along with Naked Raygun, Crudos is the definitive Chicago punk band, the Effigies, AoF, etc. be damned. I know a good number of kids from Chicago – brown, white, black, whatever – who proudly claim that they wouldn’t have gotten into punk rock the way that they did without the influence of the crude ones. To this day DIY punk shows in Chicago—north and south side alike—boast more Crudos shirts than I see anywhere else in the US; Chicago just wouldn’t have been the same without Crudos, and Crudos wouldn’t have been the same without Chicago. All of this circumlocution brings us to SIN ORDEN, who in 2000 released their first EP (Brutalidad Junvenil) on Lengua Armada Records, a label run by Martin Sorrondeguy of Los Crudos fame. Based in Chicago’s south side (also home to Crudos, of course) Sin Orden was at the time a bunch of teenaged Latino boys playing in their first ever band. Now, I have no way of knowing how many kids worldwide Crudos has inspired to pick up instruments and thrash ‘til death, but Sin Orden undeniably began as a Crudos worship band in a scene that had equally undeniably come to view Crudos—who broke up in 1998 after seven years as a band—as big brothers.

At the same time that Sin Orden was honing their chops, a revival of the straightforward hardcore approach of the early ’80s was being championed in a DIY HC scene finally over the excesses of emo. The millennium hit, and these bands (What Happens Next?, DS-13, etc.) started wearing bandanas, playing fast HC again, adopting some ’80s aesthetics, and being called Y2K thrash. Because they played fast hardcore in the year 2000, Sin Orden’s first EP was often — erroneously, I think — lumped in with this trend. Why was this classification an error? First of all, Sin Orden was not a self-consciously retro band. Secondly, they didn’t fit in with either the aesthetics or goofball sensibilities of the major West Coast (US) Y2K thrashers, or with the more brooding East Coast bands, many of which were self-consciously rocking a Black Flag vibe. Sin Orden was a serious thrash band, but not one whose major self-expression resulted in the dour manfeelings vibes of bands like Tear it Up.

Now, this first Sin Orden EP did not go unappreciated in its day. It sold out quickly, and I remember it got great reviews at the time. It was often either compared to Crudos or some Y2K band, and most of those comparisons were certainly favorable if not downright excited. And, over the years, Sin Orden has gained a cult following—and one MRR cover story—that could have some arguing that they’re not underrated at all, especially compared to some of the other bands I’ve written about in this forum. Still, looking back I think that the constant comparisons to other bands and the deluge of fast hardcore bands that emerged when the millennium hit meant that, for some, Sin Orden’s first EP got lost in the shuffle.

I can’t believe how infrequently I hear people reference Brutalidad Juvenil. So I will talk about it here. You want to know what I think? I think that Brutalidad raised the bar for how good some random Midwestern teenage hardcore record not from the ’80s could be. This record is not just a period piece; it stands along side the classics. We’re not talking a pretty good band that gets overlooked. We’re talking about an all-time band that needs to take its place on the HC pedestal. Reader, it you are not slamdancing when the needle hits the first groove on this 7”, you are probably not into this kind of music.

Here’s the thing: from day one Sin Orden was—and they probably remain—the best band directly influenced by Los Crudos. But they have never been “just” a Crudos ripoff band. Maybe some old timer who saw their first shows can remember when they were just a “little brother” band, but by the time Brutalidad was recorded, these students had become hardcore masters. And two EPs, two split EPs, and an LP later, they remain masterful punk elder statesmen that some (smart!) young kids are probably trying to emulate as I type. I hope by now that it’s clear that my long intro about Crudos is not meant to further place Sin Orden in Crudos’ shadow, but rather to remind us all about how rock ’n’ roll history is made and then transformed. One band influences another by shaking up an old formula—I mean, no one thought ’80s style hardcore would be made relevant again in the ’90s, and then again in the 2000s—and both bands add enough spark and originality to the formula to make us listen afresh. The cycle continues unabated.

If you’re not yet convinced, just listen to the cyclone-like ferocity of the guitar riff on “Perro Mundo” and tell me that it doesn’t rip. Sin Orden has got everything working on Brutalidad; the caustic vocals are completely unhinged and furious, the guitar sounds timelessly catchy but raw, the lyrics are charming and insightful, and the songs are memorable stompers through and through. (For those of you familiar with the records Sin Orden released after this first one — I don’t think the second EP came out until ’06 or so — I should note that the songs on Brutalidad are not as lightning fast as what that band came to play, but that only helps the riffs stand out all the more.)

And you know what? Sin Orden has been playing vicious, intoxicating thrash for a decade now. Their records are all stalwarts in my collection. I’ve seen them play in both New York and Chicago and they’ve torn it up in both cities to sweaty and appreciative audiences. As far as I know, they are never not good live. But there are a lot of you out there not yet worshipping at the altar of this band. What the fuck are you waiting for?

1That is, for those punks not in riot grrrl revival bands, AmRep-style mysterious guy acts, or uh, Milk Music.