From the Vaults: Matrax compilation 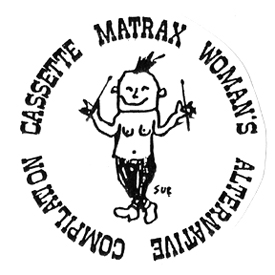 It’s been over two and a half years since I made a post here on MRR, but I was inspired to digitally resurrect myself after getting in touch with one of the people who released a tape compilation that resides in the magazine’s archives. The Matrax cassette was assembled by two punks from Ottawa in 1985, and features 13 all-female bands. I was familiar with some— the Raunchettes had a few vinyl releases including one on Bomp!, Pre-Metal Syndrome did an LP on Adrenalin OD’s label, Anti Scrunti Faction did stuff on Flipside Records, a couple bands appeared on the seminal P.E.A.C.E. comp, etc. — but many of them were obscure, with some intriguing band names. Industrial Waste Banned? Cracked Maria? Topless Answer and the Frilly Questions? The tape itself is a diverse and engaging listen, ranging from straightforward punk to brooding post-punk to more experimental sounds and beyond. To my ears, some of the best material includes the catchy tune by Sally’s Dream, the fuzzed-out, tightly wound hardcore of the Raunchettes, and the snotty blast of ASF’s “Writhe Like Worms.”

Julia Pine, who put the compilation together along with her friend Colleen Howe, was kind enough to answer some questions about how Matrax came to be — read below (my questions in bold, her answers in plain text), and listen to the complete tape as well!

For a little context, can you talk about how you got involved with punk and what the scene was like (in your particular experience, anyway) in Ottawa in the early/mid ’80s? How did you get “plugged in” to the international scene, to the point where you organized a compilation of bands from all over Canada and the US (and one English band!)?

I’m not sure how Colleen got involved — I think it was through high school. In the late ’70s in high school, the tiny punk scene was sort of like a support group for messed-up kids. We just naturally gravitated together, and the punk vibe at that time — mostly English bands like the Sex Pistols, the Clash, Siouxie and the Banshees, Crass, etc., and a few American bands, like the Ramones, etc., embodied the frustrations we all felt and gave us a focus and an outlet. I got involved in the punk scene because I became infatuated with a punk in my school — at that time nobody even knew what it was — and I was fascinated. We started dating, and he kind of decided that I was going to be a punk, too. I don’t think I had much choice at that time!

The way information travelled back then was through the material that came with records (covers, flyers, etc.), gig posters, zines, personal correspondence, alternative radio, and through people travelling from other cities. At that time, you could spot a punk a mile away, and we all stuck together, and if you went to a city you would just automatically hook up with the scene at a gig, or just walking down the street in the right areas of town. That’s how we all kept in touch, and when Maximum Rocknroll came along, it was very much part of that system.

What was the motivation for doing the compilation? What does “Matrax” mean?

By the early ’80s, there was a very strong grassroots feminist thing going on. A lot of experimentation with Wicca, alternate sexualities, and what I guess we would call second wave feminism going on. Now a lot of that is pretty mainstream, but at the time, it was all very radical and underground. There was a lot of protesting, too, about nuclear war, Ronald Reagan, etc., and a lot of sort of latter-day “consciousness raising” for women. A certain faction of the Ottawa punk scene — which was very political — plugged into that, and Colleen and I were very much part of that aspect. “Matrax” comes from “mater” which means mother in — what — Latin? We were all into Mother Earth and the feminine recovery project, so we took that, and attached it to “trax” — i.e., cassette tracks, music, etc. In other words, it was meant to signify “women’s music.”

Today I find a lot of affinities with what Pussy Riot is doing with what was going on with Matrax. A total rejection of the sexualization of women, and all about strength, empowerment and the love of women and womanhood, and very political.

How did the two of you actually put together the compilation? (Everything from getting in touch with the bands, assembling the booklet, actually selling the tape to people, etc…)

It’s kind of a miracle, actually. Before the internet and CDs and computers. It was all very hands-on. I had been in a couple of all-womyn (we didn’t use the world “girl” then) bands, and I thought it would be interesting to do a compilation of all-woman bands from around the world. I got Colleen on board, and we sort of picked up momentum from there. We were lucky to be surrounded by a lot of very talented people who helped us with the technical side — hooking together a bunch of cassette players for reproduction, helping us with the studio aspect, a fantastic cartoonist for the images, and the rest was a learning curve. We found out about the bands almost exclusively from fanzines. We just went through them and looked at all the compilations out there, etc., followed leads, etc., and wrote to them, etc. We had wanted to go further than just North America and England, but it was difficult back then to communicate and find info without the internet.

As for the booklet, we asked each band to provide an info sheet, so each page is based on one of those. The cassette also came with a sticker.

Do you have any particular memories of the bands? Several of them never released anything outside of maybe a demo tape or one or two compilation appearances. Were you close friends with many of the bands or did you just get in touch with them to do the tape and that was it?

The bands were a mixed bag. Some were quite slick and well established and well produced, and others just sent us a tape made on a ghetto-blaster at a gig somewhere. Luckily, as I say, we had help in the “studio,” i.e. a technical genius friend or two with a four-track in my mother’s basement, who helped to homogenize the sound a bit, and improve the sound quality. The criteria was that the band had to be exclusively made up of women.

We didn’t really know any of the other bands, I don’t think. Past Layers was a reunion of an earlier band Colleen and I were in, called Last Prayer. We were around in ’81-82, and were on a comp album that came out of Quebec City called Blender Mix. We needed to pad out the numbers a bit, so we recorded a couple of old songs from the “early days.” Hence the name “Past Layers.”

Unwarranted Trust was an all-girl band I was in at the time. We were on the famous P.E.A.C.E. compilation album put out in ’84 by MDC, as well. I think we used some studio leftovers we made for the P.E.A.C.E. comp for Matrax. Topless Answer and the Frilly Question was a friend of ours, Sue Dyment, who now goes by the name Kismet Dyment. She was a creative genius — a master social commentator who did incredible political cartoons — she did the logo for Matrax. She has just published a book you can buy on Amazon — it’s great. She also wrote incredible poetry — I guess you could say she was sort of a dub or slam poet — and I really wanted her to be on the tape, so I lured her into my mother’s basement to lay down a couple of tracks with me. I played “drums” with chopsticks on a cooking pot, if I remember correctly, as well as the incredibly distorted guitar, and she hummed the bass track because we didn’t have a bass player for that one. I think our friend Vince Saulnier or David McCaig did the recording with a number of different tracks on a machine they had. Anyway, that’s how the song “Punching Bag” came about: a feminist anti-abuse anthem based on the music of the Monkees’ “Stepping Stone.

Her other track, called “Felty-Assed Horses,” or something, was an anti-capitalist piece that we did with an old electric mini-organ thing from the ’60s that I bought at the Salvation Army. We just played it and sang together in a sort of choirboy style, and she recited her poetry over it. I think it’s so brilliant! She was, and still is, such a genius!

One other thing about the tape is that our master tape was much longer than the cassettes we ordered later on to sell. It seems the company shorted us on a couple of minutes on all of them, so Vince, who had volunteered to do all our production, had to speed up the whole master cassette to fit into the space of the ones we were selling. As a result, the whole cassette is really, really fast. When I hear it, it just sounds like The Chipmunks to me, but luckily nobody else seemed to have noticed that!

One more thing about the tape was that, even in 1984/5, it was sort of Copy Left. We sent a master copy of the tape, as well as a master copy of the booklet to each band, so they could reproduce them as they like and make their own profits. I’m not sure how many, if any of the bands did this, but I think it was a pretty awesome idea.

What’s your involvement with music and activism these days, if you don’t mind talking about it?

I can’t speak for Colleen, but I’m not particularly active these days. However, my experience with the Ottawa punk scene, and the scene in general has indelibly coloured my outlook on life, and my approach to living. It was great to be exposed to such radical thinking and lifestyles at such a young age. We mostly lived together in communal houses and lived very much an “underground” and very radical existence by today’s standards. I know I will never be able to look at the world in any way but the one I learned from those days.