Hey, here’s the third Life During Wartime interview, from our good pals at KBOO’s Life During Wartime radio show in Portland, OR… This time Colin interviews Portland “burnouts” LOOSE VALUES, whose complete on-air performance can be heard here. Come laugh and cry with us, won’t you?… 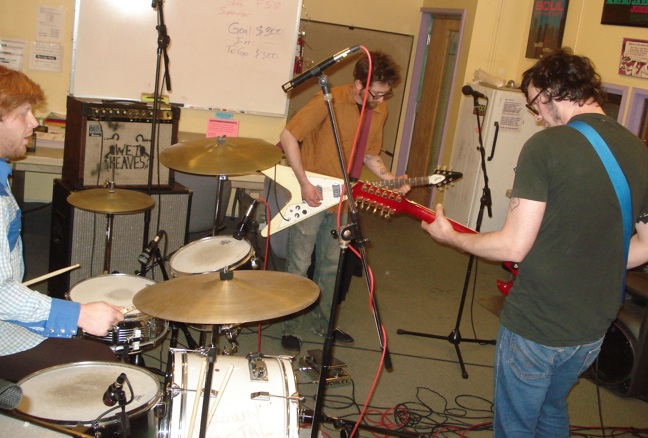 Colin: How did you decide to start playing as a band?

Justyn: Drew and myself have been playing for a while. We used to play in a Halloween band called Ray Davies Babies with Rabies [lots of background laughs] and that was really fun. We liked playing  music together.

Colin: And this Halloween band was it all sorts of stuff or…

Justyn: And then Pat came and saved u.

Patrick: I rolled into town in my hoopty.

Colin: How did you come across your name? Sub-question: did you realize it’s a combination of the Black Flag songs “Loose Nut” and “No Values”?

Justyn: Yeah, we thought about that afterwards, but  really I was in the Bay Area and my friend — we’d been staying up all night, and he made us watch the Garbage Pail Kids movie. I don’t know if you’ve ever seen it but it’s pretty weird

Justyn: It’s pretty awful, but it’s really great at the same time. We were watching it and we were kind of blown away in our overhang stupor, and our friend  walked in and said, “Oh, you guys like this huh?” And we said, “Yeah, but it’s so messed up. What is going on in this movie? It’s so weird and offensive.” He said, “Well, yeah, but you know they had loose values in the ’80s.” and I immediately fell in love with that name and told Drew about it, and there it is.

Colin: Next thing you know you’re here at KBOO telling the story. Are you guys playing in any other bands at present, or contributing to the punk scene in some other way? Justyn: I don’t know about contributing [laughs]. We’re kind of burnouts, you know, we applaud from afar. Pat here is getting ready to go on tour with his other band, which is…

Patrick: I have a band called Warhammer 48k, and other band called Jealousy. But that’s all. Neither here nor there… Well, more there than here…

Justyn: It’s very there… but here, I play in another band. It’s kind of a heavy duty metal band called Weirding Module where I play drums. We’ve only played a handful of shows.

Justyn: So do I! That’s weird, dude. We should work together sometime. [Wha-wuuuh sound effects — they do work together…]

Colin: So, Portland has  a pretty divided scene as far as punks, garage, etc. Where do you guys feel like you fit in?

Justyn: I guess I’ve notice that, but I’ve always done my own thing. I just like music. I’ve gone to every kind of show you can imagine, and hung out with different folks in this town. It’s definitely divided but we don’t’ give too much to that. We don’t really care. Do you think it’s divided?

Colin: Kind  of, but to each their own.

Drew: We just want to hug everyone. [Lots of talk about hugging and unity here…] Colin: What is the funniest thing that’s happened to you as a band?

Colin: And how’d that come about?

Justyn: We got asked. First we thought we were playing with the Pagans…

Drew: …then it turned out we were the Pagans for that show.

Justyn: Yeah, Drew got in contact with those guys to figure out what was going on. We ended up learning some Pagans songs and some Dead Boys songs, and we almost learned a Human Switchboard song.

Drew: We did… five minutes before we played it.

Justyn: He  sang and played on a Dead Boys song, and then him and — what’s that dude’s name?

Drew: Sound checking with those guys and making it halfway through each song, and then they’d go “Okay, it’s fine.”

Justyn: Old, fragile burnouts. We see our future in them [laughs all around!] But it was an honor to play. We’ve been huge Pagans and Dead Boys fans forever so it was pretty amazing.

Drew: Yeah, it was a good night. Colin: And what are your plans for the future? Demo coming out?

Justyn: We have a demo out now, actually. It’s been out for a while. I don’t know where you’ve been… and I can say the name of it because it’s the name of the demo (referring to FCC regulations).

Justyn: It’s called Raging Bullshit. It’s a piece of art in itself [laughs from the crowd]. But, we’re getting ready to record this weekend over at Buzz or Howl, and I’m pretty excited about it.

Colin: How should people contact you if they want you to play their shows?

Drew: We do have a band email: loosevalues@hotmail.com

Drew: …and I’ll check it tomorrow.

Justyn: We’ll go see how many shows we have lined up tonight.

Thanks to Loose Values for playing and for playing records for the rest of the radio show.