Welcome to the latest in our series of Life During Wartime interviews, where our BFF’s at the Life During Wartime radio show in Portland, OR, talk to bands who perform live in the studio… This time Colin interviews Portland’s celebrated ARCTIC FLOWERS, whose LP has just been released on Inimical Records! Their on-air performance can be heard here. Read along with us, won’t you?… 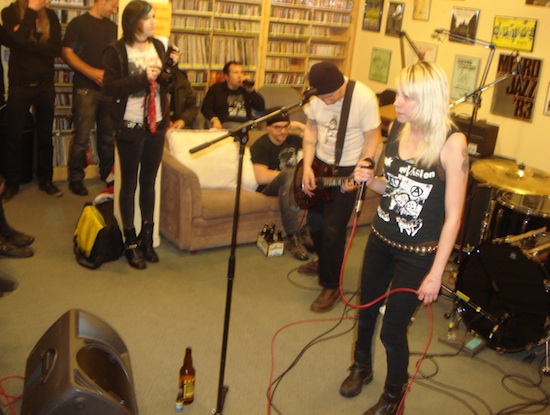 [The first moments of the interview didn’t get recorded… this is probably how it started:]

LDW: Please introduce yourself and your instrument?

Lee: I play bass, and sing back ups.

LDW: And also, add what other ways do you contribute to the portland punk scene?

[And now, ladies and gentlemen, this is where the tape actually starts recording!]

Alex: She is my spirit animal.. LDW: How ’bout you mike?

Mike: I play in some other bands. I sell sandwiches at punk shows…

Mike: …and I sometimes book shows.

Mike: I provide the punks with fermented vegetables.

LDW: They need it for their digestion.

LDW: So, Arctic Flowers, how did you start as a band?

Mike: Stan moved here from Austin, and was looking to start playing music.

Stan: …and we (Stan and Mike) had played before, in a band with Lance Hahn,

Mike: it’s true, he and I played music for one day in a band called An Uneasy Peace.

Stan: We also slept on the floor together.

Stan: And you were like, “I have a friend named Lee”…

Mike: Yeah, and it turns out that Lee and Stan know each other from long times back. Lee: Yeah. I met Stan in 1995, when we were young children. And, I’ve been living in Portland for a few years/ So, old friends getting together and we just jammed, and it meshed together cause we all wanted to do the same things. We had our influences, but we also created our own style and sound. Then, we needed a singer. We were stuck for a while. How long did we wait for a singer?

Stan: A year. Then we saw Alex sing in an Avengers cover band at Halloween and asked her to sing.

Alex: I messed everything up from then on. (laughs)

LDW: Then you decided on the name Arctic Flowers, how did that come about?

Stan: I guess we stole it from Rubella Ballet.

Alex: Yeah, I like Rubella Ballet a lot, and the songs got great imagery. We went through a lot of names, a LOT of names. It was the only one that kept reoccurring. I’m glad we kept it, I like it, it’s fitting.

LDW: Awesome. How about your releases? What have you put out thus far?

Mike: We have a 7”, that we put out ourselves, then we have a split 7” with Spectres, from Vancouver, BC, that our friend Foat put out. We’ll be repressing it ourselves.

LDW: And how did the split come about? Did they approach you, did you approach them?

Stan: Foat approached us. We played a show in Vancouver, and Foat said he wanted to do a split with us and Spectres. We said, “Yeah, we like Spectres,” and it went from there.

Mike: It was one of those wasted ideas that usually don’t come to fruition, but that actually did. LDW: Now let’s get both complimentary and nasty. The Portland punk scene, beautiful and crazy as it is, what would you say are its greatest strengths and weaknesses?

Lee: God, Colin! Well, clearly we have a ton of awesome bands, doing a lot of different stuff, just within the punk scene. Portland at large has all kinds of music going on, different genres than punk but if you pick a weakness, maybe we take it for granted? I don’t know…

Lee: There’s like, three shows a night, I mean a week, every week. Some towns are lucky to get one a month.

Alex: Three shows a night is safe to say.

Mike: Because the music scene in Portland is so large — the underground and the DIY scene — there’s so many people doing so much stuff, even the punk scene is so big that it’s very fractured, and split up into different crowds. It makes it hard to know about really cool, vibrant things happening in your city cause you get so absorbed into just one kinda world, almost like a clique.

Lee: Yeah, things are siloed off that even within your own peer circle there’s too much going on in one night that you can’t have all your friends in one place. It’s a plus and a minus, I guess. What do you think, Colin?

LDW: Oh, I’m the interview-er. So that was the weaknesses, strengths are we have a lot of good bands.

Mike: Good bands. We also have a lot of really driven, energetic, awesome people that do really great, awesome things for the scene, like this radio show, like show spaces…

Mike: Blackwater Records, where there are records available, shows, movie nights, fun stuff like that.

Lee: There’s a lot of awesome studios, too. Buzz or Howl, but people are also doing stuff in a more DIY way. There are so many options!

LDW: Awesome. Next question: Aside from the instruments that you play, what are your roles within the band?

Alex: I’m the driver, most of the time, I just like driving, though.

Stan: I play guitar, I write a lot of the basic stuff, but we get together and it changes as people add their parts. I guess I come up with the framework.

Mike: I make a lot of jokes that no one laughs at… (laughs) 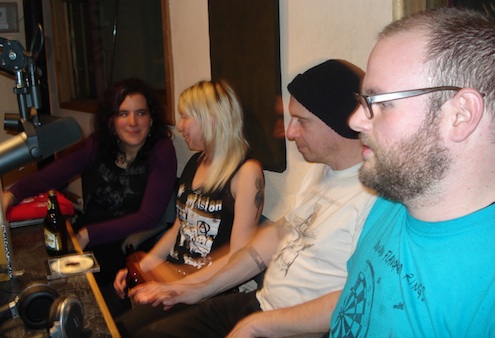 LDW: So, Alex, you’re the singer. The lyrics, I don’t know if people can tell out in radio land, but they have a lot of literary references, and they’re pretty poetic. Have you sung in a band before, and had you had experience writing poetry and/or lyrics?

Alex: I’ve never sung in a band, and English has always been by far my least favorite subject in school. But I really, really enjoy reading a lot. I’ve played in bands, but singing in a band has been a lot better and funner than I could have thought. It’s less stressful if you just give it a shot and keep going with it.

LDW: Next question — do you feel like you have been treated differently at various times due to having ladies in the band, or due to it being 2011 have those barriers been erased and it’s a non-issue?

Lee: I think gender is always an issue but I think that in our scene it doesn’t really come up as there being a lot of disparity between the sexes. But people always point out there’s two girls in the band, or, oh, there’s girls in every band tonight. So pointing it out means that women aren’t still having the same level of participation as men in bands in general. In Portland there’s far more women involved in the scene than the average punk scene around the country. I think it’s always going to be an issue, but I don’t think that I have to fight to be holding my own at all. 15 years ago I did, pretty consistently. “Oh, she’s a girl, of course she’s playing bass.”

Alex: There is a lot of (jocky voice) “I LOVE that your bass player’s a girl”… okay.

Lee: And I think it’s harder if you’re a girl drummer. People always say, “She’s great for a girl drummer.” That still is pretty common to hear. So, I think we still have to wait a couple generations before it’s equal. But in Portland you see a lot of young girls, really young girls, getting involved in music really early. I’m really excited to see the next 10 years of women in punk, or women in rock or music in general. Pretty soon it will be a little more level. But I think the West Coast will always be a little different than the rest of the country in that way, of women being involved and in the forefront of music, and dancing in the front of the pit and things like that.

LDW: And, winding down, what are your plans for the future? You have an LP coming out..

Alex: We’ve been recording the LP the last few weeks [ed. note: It’s out!]. We just got back from tour on the West Coast…

Mike: We plan on doing more touring, such as the East Coast [booking currently!] or another continent, such as Europe. Distant plans at this point, but right now just getting the LP out.

Alex: …on Inimical Records. Thanks to sandwiches.

LDW: Any final things you want to say?

Alex: Thank YOU! You rule..

Lee: Thanks for helping and supporting putting my power supply back in the outlet Colin, during the set.

Stan: Thanks for having us.