Hey, it’s been a while but we’re back with another exciting Life During Wartime interview! Portland punk rockers the BI-MARKS played live on KBOO on June 6, 2011 and had this fascinatin’ on-air conversation with LDW’s Colin. Hear their killer performance here! 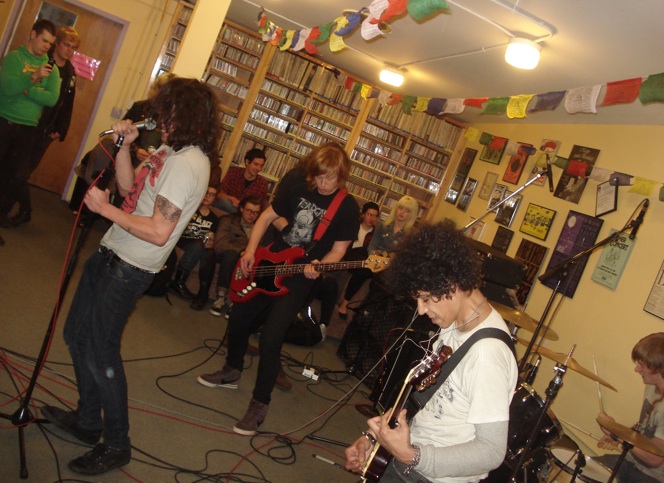 LDW: Alright, so we should just get this out. So what sort of what have I done?/what burns? Would you like to say?

Calvin: I’d like to say oh my god to biggy dude

Eric: Don’t forget to say hello to burno to a millionaire.

Eric: Don’t forget to tell a man where the plums at. H3 is in place!

LDW: OK, backing up to the questions — who are you guys and what do you do in the band? Let’s start with you, Evan.

Evan: My name is Eric, I play guitar.

Calvin: Oh, he slappa da bass alright. I tell ya that much.

LDW: What else do you do in the punk scene? What other—

LDW: —bands do you do or… OK, nothing from Kevin. What other bands do you guys do outside of this?

Eric: Me and Ian are in this band Death Machine, and Calvin is in Athetic or whatever it’s supposed to be.

LDW: Is it called Fnordgasm?

Eric: That’s what it should be.

LDW: And does the new post-Nerveskade band have a name yet?

Ian: No, but we’re playing next month, hopefully.

LDW: Awesome. And how did you get the name Bi-Marks?

Calvin: You know what I mean?

LDW: What made you think that’d be a good band name?

LDW: Alright, and how did this band start? Ian: Evan and I lived in Seattle. And…

Eric: They told me I had to do it.

Ian: So we flew him out here and he started playing. And played one show in Seattle and moved down here. Calvin started playing drums. This guy Justin was in it for a while. And then Adam Becker. And then now Kevin plays guitar.

Calvin: Dude guyman does the dirt.

LDW: OK, so you guys have a song called “Fear the Animals.” How did that song title come about?

Ian: Uh, there’s a line in the song which is, “We gotta get outta here if it’s the last thing that we ever do,” and that’s also a line in a Fear song.

Eric: And the Animals.

Ian: And a line in an Animals song.

Ian: That song’s about buying weed.

LDW: Did you guys just record an LP?

LDW: And is it done with the mixing stage?

Ian: No, we still gotta mix, but all the tracking’s done. It’s called The Golden Years.

LDW: And do you know who’s gonna be releasing it or how soon it’s gonna come out?

Eric: Gus from Mundo Muerto is doing it, but… I don’t know the name of his label.

Calvin: Mata la Musica, what have I done?

LDW: Do you think the fact that you have an LP coming out and you’ve written a lot of new songs will ruin your reputation as the laziest band in Portland?

Eric: We still need to borrow a van at some point in time. As soon as humanly possible.

Calvin: And we need 25 bucks each.

Eric: We need to borrow a van to get to Hunting Parties in July ’cause we don’t have a van and we’re supposed to play that. So if anyone wants to help, that’d be tiiight. Ian: No e-mail us at bimarksusa@gmail.com

LDW: A question from Maus — Why is Adam Becker?

LDW: Alright, and what future plans do you have for the band? Just the LP?

Ian: I think we’ll book a tour after that. If some people can help us or something, ’cause we’re not gonna do it ourselves.

Eric: We need a lot of help.

Kevin: Someone else would have to do all of it for us. (all laugh) But we’ll have a good time so, you know.

LDW: Anything else you guys wanna say that doesn’t involve cuss words?

Calvin: Who am I?

Ian: Is it cool to snack in here?