Immediately after reading Sacred Heart I needed another fix, so I wrote to Liz and ordered a copy of her mini Cyanide Milkshake — possibly my favorite comic fanzine in the past 10 years. Sex, punk, and B-movie references fill every page. Goofy ads for fake products like Man Merkins and movies like the post-apocalyptic blockbuster Sex Beserkers (Rated G for GWAR) are interspersed with short narratives featuring weirdo teens, zombies and dogs. Her storytelling/joke style (and even her art to some degree) reminds me of early Dork/Milk & Cheese-era Evan Dorkin. Another reason that this comparison keeps occurring to me is because they both seem to be steeped in comics culture in a similar way. Liz works full-time at a comic book store and draws comics on her days off. You can’t be a lightweight and keep that up.

Waiting for the next Cyanide Milkshake to hit my mailbox is fucking torture. In the meantime, to ease my comics blue balls, I asked Liz Suburbia some questions…

Janelle Blarg: It’s bizarre and kind of magical to me that I’d never heard of you until last year, but you obviously draw all the time and have a fully developed artistic style. Where did you come from? Or rather, when did you start drawing comics and when did you start publishing them?

Liz Suburbia: I HAVE TRAVELED HERE FROM THE YEAR 1984 TO MAKE COMICS FOR YOU ALL. It was a long trip and I started it as a baby. I think I’ve always been drawing and writing little stories going as far back as I can remember; my first real effort though was a goofy autobiographical web comic I started at the end of high school, followed by my first zine a few years later. That early stuff was pretty bad though, I think I had to get out and go through some shit and learn a lot more about life before I started making comics I was satisfied with. I started Sacred Heart about two years ago and in that time have started self-publishing Cyanide Milkshake and some other minis as well. Sacred Heart is your ongoing series about high school punks and weirdos. How much of it is biographical? (Really, I want to know if you knew a guy like Otto who would hang out under the bleachers and lick shoes).

Ha! It’s weird because it takes place in my old hometown, and all the kids went to my old high school and all the landmarks are from real life, but I’m not trying consciously to make it too personal, you know? I get asked a lot if Ben is supposed to be me, which makes me uncomfortable because she’s really not intended that way, but I guess all your characters have a little bit of you in them. Maybe I shouldn’t have made her a dark-haired girl with a big nose. Otto is kind of a composite of my partner, my high school boyfriend, and a couple other guys, but as far as I know none of them ever foot-perved under the bleachers. I wouldn’t put it past them though.

I like that there are no parents featured in Sacred Heart. Just like Peanuts. Parents are boring! Censor them! Was that a conscious decision?

It’s actually a big part of the plot, though I’m not gonna tell why until the next book (which is going to take place about ten years after this one). Hopefully it won’t take me ten actual years to get that far into the story. I work at a snail’s pace and I have a day job, though, so it might be awhile.

It means a lot that people seem to really like the sex scenes, because they’re a big deal to me. There’s a lot of sexualization in comics that’s alienating or problematic and I really want the sex my characters are having to be more human and positive. I like my comics loaded with sex but it really takes the right approach for it to actually come off as honestly sexy, or at least realistically awkward, you know? I dunno, I grew up really repressed so I just hope it’s not too obvious that I’m working my issues out in comic form or whatever. One thing I can guarantee is that there’s lots more fucking still to come. Heh. 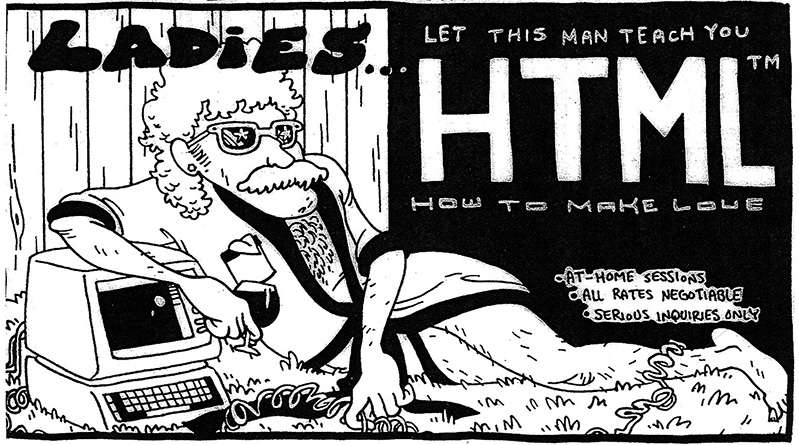 Sacred Heart is only online for now, right? Do you have any plans to produce a print copy? What are your feelings about print vs. online publishing?

Yeah, my plan is to finish this first book online and then see about getting it published. Whether I put it out myself or if someone else is interested, we’ll see, and then go from there. I like print because I’m kind of old fashioned: it’s nice to have an object to pass between friends, plus print is ultimately harder to monitor and censor. There’s a lot of accessibility that comes with publishing online though, and it’s important to me that anyone who wants to read it be able to, whether they have internet access or not or whether they can get their hands on a book without spending more than they can spare, or whatever. Ideally, I’d like to have a nice print copy of Sacred Heart for those who want it, but to still leave it up online in some form for everyone else. We’ll see.

What are your cartooning weapons of choice? Typically, how long does it take you to complete a page?

For Sacred Heart I use Bristol board and pens, though I’m working my way up to nibs because I’m a serious fucking artist y’all. I usually get two new pages done on the two days a week I don’t work, so I guess my rate is about a page a day. With Cyanide Milkshake and my minis, though, I just use computer paper and Sharpies. They’re supposed to be loose and fun, so I try not to let my anal retentive tendencies get the better of me. With the print stuff it’s almost like a game to see how fast I can get it made and still have it be readable. You’re highly adept at drawing party scenes — a crucial punk cartoonist skill that not everyone can claim. Do you still go to house shows/parties in Virginia?

I do! I’m lucky because there’s always so much going on the in DC-MD-VA area. Everyone’s so involved in the scene around here, we get a lot of great bands coming through, and when a space gets shut down another one pops up before too long. I have to skip more shows and parties than I’d like because of work and other responsibilities, but I don’t care how old I get, I’ll always be really into this shit. And anyway if I never got out of the house and saw people being weird and crazy and angry and in love then what would I make comics about?

What comic artists are you inspired by? What are your current Top 5 favorite comics? Favorite publishers?

The people who get me most excited about making and reading comics are my friends: Matt and Kevin Czapiweski, Darryl Ayo Braithwaite, L. Nichols… those are just a few. I’d list everyone but we’d be here all day. Something Kevin talks about a lot on the Comics Cube blog is comics scenes, which really function like punk scenes and which I think can be integrated with punk scenes to everybody’s benefit. It’s all about making your own shit and and supporting each other, not just consuming but creating and participating in your own culture.

As for the bigger names, definitely Los Bros Hernandez; Love and Rockets is essential. Carla Speed McNeil’s Finder series is just as huge to me, she put it out herself for years and now Dark Horse is collecting it. Brandon Graham — his passion for comics and his emphasis on community and independence and his willingness to push the limits without taking himself too seriously is just punk as fuck to me, even though I don’t think the punk scene was ever his crowd. Ross Campbell, Paul Pope… I could go on forever. I guess I don’t think about publishers too much though, hmm. I will say this: Marvel and DC are The Man and they don’t need your money.

Are you going to continue publishing Cyanide Milkshake? It’s possibly my favorite zine of the past 10 years. Weirdly, the filler might even be my favorite part. “Sex Beserkers,” “HTML,” “Nutsacks of the Stars” — all genius.

You bet your ass I’m gonna keep publishing Cyanide Milkshake! I’m hoping to have #4 out by this spring, it just takes awhile between issues because I want to have enough free time to keep Sacred Heart semi-regular.

Get old, stay pissed off. I don’t know if I’ll ever be a comics “name” or anything, or if I’ll ever be able to quit my day job and just live off of comics, but I don’t ever want to stop making them. If I can live to be 100 and look back on 80 years of work and be okay with it, that’ll be good enough for me.