Protests Go Organic in Madison: Raising the Stakes in Wisconsin

By Christopher Fons via counterpunch.org

The stakes were high in Madison, Wisconsin today as Governor Scott Walker’s bill to overturn most collective bargaining rights for public workers came to the floor of the State Senate. Tens of thousands of teachers, students, tradesmen, firemen, and workers of all stripes assembled to stop the vote, at least for today, they were victorious. How did it happen? Through massive direct action and a trip to Illinois by the Senate Democratic caucus.

Republican leaders were confident last night after caucusing and by the morning the common wisdom expected a solid party line vote for union busting but the people and their allies in the Senate had a different plan. 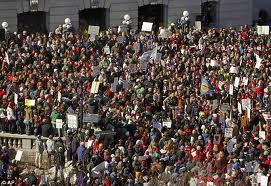 For a while today the capitol building was simply too noisy and too filled with people for anyone to move. Elementary teachers were obviously the majority as hands went up to quiet the crowd by the thousands when important information was to be conveyed.

The peak of the day came around midday as the Senate leader growled to the sparsely populated chamber that some of the members of the body had not showed for work. It was then that over 20,000 protesters erupted into collective euphoria as we realized that quorum was not to be had. For the rest of the day the crowds grew and grew and a more festive atmosphere reigned as we learned that the Senate Democrats had purposefully packed up and left for the land of Lincoln.

One of the most striking aspects of this protest movement is the organic character of its motion. Lots of organizers have made the calls, hired the buses and lined up the speakers but in the Capitol building rotunda the crowd chants, yells, sings and cries together in a collective way. Protesters are not told what to do, they simply figure out what needs to be done, make decisions on the spot, and act. Another inspiring part of the demonstrations is the affection showed towards a group who have been exempted from the bill, fireman and police. The firemen are the favorites. Sporting their uniforms seasoned with soot, bagpipes bellowing, and signs declaring their loyalty to labor, they give evidence and meaning to the word solidarity. It’s not just the firemen showing their support, however, it’s the police too. Cops got huge cheers today as they entered the floor of the rotunda and fed protesters hot dogs and coffee.

It was a victorious day. Each passing day further clears the brush and reveals who is on what side. Each passing day elevates the consciousness and the confidence of workers. After today’s tactical victory the teachers union and AFSCME have called for another day of action. Friday should bring another massive response…more to come from the front line of the war on workers.