Record and Video of the Week:
SOMETHING FIERCE 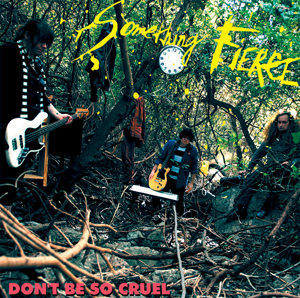 There are some people in our little microcosm of punk rock who manage to transcend genres. They are people who in any other world would be shuffling on everyone’s iTunes, playing on car ads. The likes of Mark Ryan (Marked Men, Mind Spiders), or Jay Reatard — people with an ear for a song, who can’t help but create and always walk a few steps ahead of the rest of us. I would put SOMETHING FIERCE’s Steven Garcia in the same boat. The guy knows how to write a song. His band’s first record was a slap around the chops with buzzsaw guitars, hooks and melodies.

The band’s new LP, Don’t Be So Cruel, moves into totally new waters. More reflective, kinda like a more punk Elvis Costello. Straight away you realize that the commonality between the two is the genius songwriting. Each song stands alone, yet works as part of a whole — the guy knows how to write a cathy song, but also how to make an album. I don’t want to take anything away from bass player Nikki or drummer Andrew because it is they that keep the band locked in. They came from Houston and played a dreary Tuesday night in town and gave it 100%. This a real band, you know? The kind that just wants to play. Hell, has to play. They rehearse, they get it right, and then, no matter who is in the crowd, five people, 500 people, they win them over. They still have a bunch more dates on the tour, so go see them… and if you can’t you can’t do that, pick up the LPs. It ain’t the last you’ve heard of these cats…