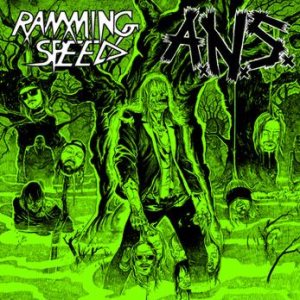 The Bay Area’s ANS has been gracing us with their brand of ’80s skate thrash crossover for years now, but these tracks venture into DEATH territory while still keeping the rad thrash vocals. The dude who sings for ANS has a perfect voice and delivery for this type of music: solid, more spoken than screechy metal growls. The last track goes into full on head bangin’ jam sesh with a messy sonic flangy meltdown. Fucking sweet. The lyrics are dark, even the ones about skating and growing up. There are lessons these guys are learning as they get older and lessons they are teaching, namely how to play skate thrash in a fresh, yet recognizable and traditional way. Props to their props to the late Bruce Roehrs with the song “Roehrs’ War.” Now the flipside… I have been a fan of Boston’s RAMMING SPEED since I saw them in a basement in Chicago. I wandered into a scene of sweaty, shirtless, denim-vested dudes wearing obscenely short jean shorts, “This song is about hanging out with your friends, havin’ a good time and eatin’ pizza. It’s called ‘Pizza Party!’” Then the first note struck. I don’t know if people take this band seriously with songs about pizza, but you should—these guys can fucking play. This band is dynamic to say the least. Delivering thrash metal with punk undertones, occasional blast beats, and definite D-beat moments with HC splattered all over this shit, there is not a boring moment. The vocals are harsh, scratchy and rage with a definite HC influence. The production on this is indeed pretty polished, but c’mon, this isn’t black metal, it’s fucking thrash. Get into it. This is a great split—two rad bands that play punk tinged thrash metal that know how to be serious, but don’t take themselves too seriously. Fucking awesome. (Tank Crimes)