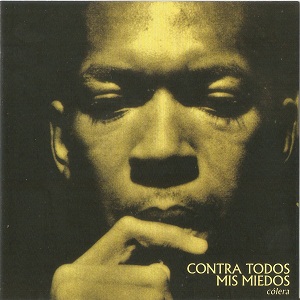 MRR HQ is located in San Francisco a few blocks from where the Saint John Coltrane African Orthodox Church used to be located—a church that was centered around an explosion of spirituality and free jazz. While John Coltrane’s avantgarde cutting edge has dulled with the recognition of his more traditional material as breakthrough classics of the genre, leading to mainstream acceptance, his experimental free jazz period is something that still remains challenging. It’s as much about Coltrane’s movement through the experimentation as a listening experience, it seems to never necessarily arrive at its destination, which is kind of the point. Chilean hardcore band CONTRA TODOS MIS MIEDOS (“Against All My Fears”) features a cropped close up of Coltrane’s image from the Blue Train LP on the cover, and while the music is stellar QUICKSAND/ REFUSED styled hardcore—and worthy of checking out alone if those points of reference prick your ears—it solidly delivers a relatively stable set of ideas. The relation to the core of ideas of Coltrane that warrants appropriating his image for the cover isn’t really evident. The title of the EP translates to rage, and while Coltrane’s music was moody, anger was never really the core of its impact in the same way you think of anger being a central focus of punk music. Coltrane died in 1967, nine or ten years before the punk explosion of the ’70s, and at the nascent steps of Michigan ’60s punk like the STOOGES and MC5, that at their most experimental were taking influence from the expansion of music simultaneously being forwarded by free jazz. The relation to hardcore might simply that this type of posi-hardcore that’s reaching for a broader meaning is also reaching to find that deeper, spiritual core beyond just existing as a pure musical experience. I can only infer that with no translations in English for the band’s lyrics or to the lengthy notes on the sleeve aside from a footnote to Karl Marx (!)—the one diatribe in English in the recording is near nonsensical. This EP is however, an impressive marked jump in delivery, playing and recording values from their 2008 XXVII LP. The guitars are free to jump around, crush and solo wildly on the flange, while segmented, crunching, lumbering break downs and harsh shouted vocals give the EP an intensity like the best of the ’90s bands of this style. Weighed on one scale it’s a quite experimental deviation from the one-two-three punk rock, but in tacking itself to one of the creative geniuses of modern music, I kept waiting for it jump off the deep end like Ascension or Om… Go for it you wild Chileans!!!! Bring out the harp, chimes and alto sax and combine that with QUICKSAND and FARSIDE!!! Overall good EP, limited to 560 copies. (Amendment Records)

Review by Ken Sanderson, taken from the latest issue of MRR — available HERE.