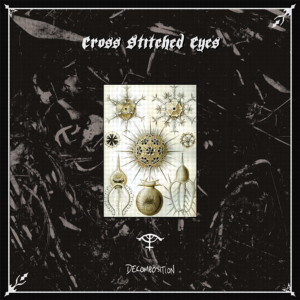 Their first record was really good, but on this release CROSS STITCHED EYES have set the bar into the stratosphere for the legions of punks diving into the world of modern hardcore punk. As steeped in KILLING JOKE and BAUHAUS as the sharp angular attack of early anarcho punk, tracks like “Animation” jerk to and fro with an uncomfortably drunken swagger, while “Suffocation” and “Existence” are undeniable plodding death rock masterpieces. There are still a few songs that bring to mind the RUDIMENTARY PENI comparisons that accompanied their debut, but the highlights of Decomposition are in their ability to make old sounds seem new again—all of the sensibilities of a brilliant ’80s death rock record crammed into a modern DIY box that even the most narrow-minded punks can get behind. A fukkn great record.
(Alternative Tentacles)