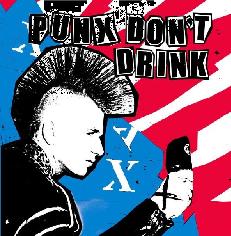 Right from the starting gun this comp is quite awesome. The first band here, POISON PLANET opens with a song called “The Victim,” which bears a postscript on the lyric sheet that reads, “Drugs and alcohol taken willingly do not make you any less culpable for your actions.” Right fucking on. I see my opportunity, and I’m taking it… This is such a simple concept to grasp, yet since we live in a world where everyone is “victimized” and “targeted” at a seemingly constant rate that excuses like “I was fucked up,” or “I was drunk,” have become just another acceptable reason to be late, reason why you ended up in the hospital, reason why you were unfairly targeted, reason why you started a fight, the reason why you crashed your bike, or worse, killed someone with your car. There have become so many “outs” to responsibility that actually carrying on as an actual human being has taken a back seat to finding a way to pull a fast one. This is nowhere more apparent than in the punk scene. Living in the Bay Area you see the (many) downsides of what happens when our little “progressive bubble” in which we live enables such a voluntary and careless abuse of self control to somehow convince an entire forward-thinking local culture to believe it’s “just the way it is.” At this point, I should mention that I am not edge, and in fact, drinking a beer right this very second, so this isn’t some sort of straight edge or various “–ist” type of rant, I just understand the concept of responsibility and realize that I’m not the only person that lives on this fucking planet, which a lot of people can’t fucking grasp. And to me that is what straight edge is really about—the ability to separate responsibilities from habits and to not embrace this “victimization” as some sort of cultural lighthouse to guide your life by and realize that your actions are just that—your actions—and to separate yourself from that mentality. I’m tired of paying for your mistakes with my time, with my money and with my patience. These concepts simply require the ability to use your fucking head, and we all need to remember that. Which, in a perfect world is why we are the fucking punx! Some are born to be mules, some generals, some sheep, but no matter who you are, in the end beliefs are beliefs, and if you actually have them and you hold true to them, you have a leg up on most people. Holy fucking tangent! On to the music… As one might expect, the majority of the tunes on here are classic fast hardcore with a few crewsh breakdowns here and there. The four bands that split this 7” are POISON PLANET, whom I already mentioned (and they drop some serious rippage), BOILING OVER, COLD SHOULDER and COKE BUST. All four seriously deliver angry tunes that have great fast parts and great mid-paced rogering, but COLD SHOULDER stands out most to me and are the fastest band on this comp. The inner sleeve boasts that this is the “new face and attitude of straight edge,” and I’m really glad it is. Ripping tunes. (Third Party Records)