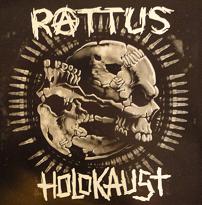 Slapped in a ultra-crustified cover of skulls, bullets and band photos, this final release from the original line up of Finnish legends RATTUS commemorated their final live appearance in September at Los Angeles’s California Discord Fest, with three new songs that highlight that the band—always experimenting over the course of decades— has never really stopped evolving. Parts surface the melody riffed, guitar-driven hardcore of their classic 1980s records, but fumble a little in their complexity and a modern recording that doesn’t ever seem to pull a cohesive direction to the attack. The bass plunks, the drums hammer, and the vocals have a really uneven delivery. Add in all the different influences—from modern metal to classic ’77 style moves—and it’s just slightly off and sort of just rambles and stews. But you know what? RATTUS were fan-fucking-tastic in LA, and are still one of the world’s greatest punk bands. Ever. So I’ll keep spinning this—like any of their diehard fans—to try to glean their inspiration. Lyrics are Finnish with no translation. On the flip, Riverside, CA’s HOLOKAUST delivers three solid, meaty standard issue DISCHARGE blasts. These tracks distinguish themselves in the basic, wadded up crunch that the guitars get in their semi-lo-fi recording—a recording akin to the happy accidents of ’90s crust records, as opposed to a current intentionally lo-fi noise fest. The drums sturdily roll around this thick, dumpy chunk of simple riffs, as the vocals blast standard issue punk declarations over the din “Brainwashed into Submission!” “Waves of Fire! Mushroom cloud! Incinerated!” making for a familiarly satisfying, two fingers in the air, dose of good punk rock fun. (Rotten To The Core Records)