Even if you are someone who fervently eschews nostalgia in favor of appreciating and participating in the here-and-now, there are probably still certain things that hone in on that particular region of your brain that makes those “good old days” chemicals flood your veins. And if your generation/demographic happens to be the mid-’80s/suburban punk, seeing any artwork by Mr. Brian Walsby is sure be one of those triggers. His style and subject matter are most iconically captured in his drawing for the original cover of 7SECONDS’ Walk Together Rock Together 12″ from 1985. At the time 7SECONDS were at their peak of popularity, and this was Walsby breakthrough into the big time, punk-wise, where Pushead reigned supreme. While Pushead’s style was precise, graphic and gory, Brian’s was loose, wild and fun. His artwork felt like it belonged to the kids — you wanted to be in the crowd scenes he drew, moshing and singing along. 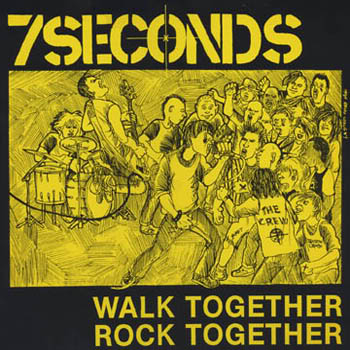 Of the olden days, Brian says, “My initial muse for being involved in the eighties punk world was this amazing slice of history that was still a rich hotbed of inspiration which needed to be documented in some way. For instance, all of these stories that I have pulled out of my hat represent the stupidity, excitement, glory, total bullshit of the time. It’s all in there. They are very ‘coming of age’ times.”

26 years later, Brian Walsby’s art finally has a bona fide web presence. Not that he completely fell off the face of the earth in the meantime — quite the contrary. Brian got busy in the late ’80s and ’90s playing drums for a bunch of bands (WWAX and POLVO, to name but two) in North Carolina, and continued to do drawings as well. In the late ’90s he rediscovered his passion for pen-and-ink and hunkered down to concentrate on honing his craft. He started contributing to magazines again, and created a series of comic books called Manchild, which, of course, you can read all about on his new website, brianwalsby.net! The website’s been a long time comin’, but it’s worth the wait. A great looking site with lots so see and buy, and we’re promised more to come.  I asked Brian what the hell took him so long (putting it a lot nicer than that, though) and he replied, “I was always a late bloomer for everything so this is just another example of that. I didn’t resist it. I love the internet. I could go on about how it is sad that you don’t have to write letters or hand soap stamps and other clever things that kids like me did twenty plus years ago but there is no point. It is a different world now. The internet is a great tool and you would be a idiot to discount it. It isn’t going away either so you might as well embrace its good points.”

While embracing the internet’s good points, Brian Walsby continues to stick to the most tactile of media for creating his artwork, with no additions or enhancements in Photoshop. “100 percent Grade A All American hand drawn. If the work is colored it is because someone else has done it,” he says.

If you’re an old fart returning to Walsby for the first time in decades, you’ll be pleased to notice that his skills have improved greatly, while his signature style and spirit are still there. His subjects are always in motion and busting off the page.

It’s great that Brian has stayed “underground” and never sold out, but on the other hand it seems kind of a shame that he hasn’t gotten a lot more recognition, especially in comic circles. He hopes to rectify that with this new website: 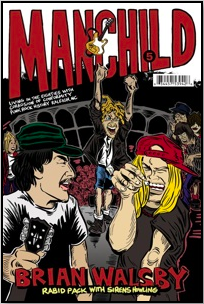 “It makes me look like a professional cartoonist, which is what I wanted to do. I wanted to fool everyone. I am kidding, of course, but I did want something that might attract a larger audience…people that liked underground cartoons but maybe didn’t care about punk rock or having a gigantic record collection…”

If you’re unfamiliar with this guy, well, it’s time to start catching up! Grabbing a copy of Manchild would be the perfect way to start, and once you’re a fully indoctrinated fan, there’s t-shirts and even signed and numbered prints available on the site. If you’re too lazy or broke for that, there’s plenty to download as well, but we highly recommend printing it out first. After all, for Brian, it is still all about the tangible product…

“The internet and technology is cool…but it is more real when it is something that you can hold in your hands.”

Brian Walsby has a one-page comic in the current issue of MRR — the newsprint zine that you can hold in your hands! And we’ll be featuring a full-length interview with him in a future issue. If we’re really lucky, that issue will have an original cover drawing by the man himself. Watch for it!